I finally grabbed some of these recently after resisting for quite some time. I decided to have a play today and I’m quite impressed so far!

I also bought a couple of new Kat von D Metal Crush shadows recently (Thrasher, Black No.1 and Doce, which is brand new) so I had a play with those as well, hooray! Colors!

These are lovely. I don’t know what else to say. I’m a huge fan. I wish they were released in a palette, because I want all of them. They’re creamy and buttery, pigmented and super, suuuper shiny. Almost wet-looking in their shiny metallicness. I love them! I decided to just go nuts and use all three today and this is what I came up with… 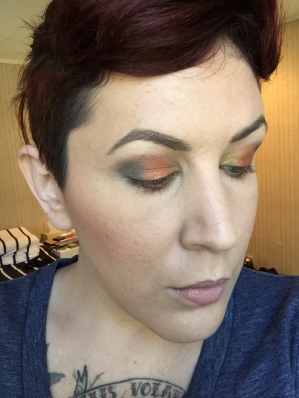 Doce, in the center, is a gorgeous fall color. It’s a coppery, reddish warm tone. It’s not as much of a true brownish copper as Synergy, but not as red as Raw Power.

Anyway, moving on to the the ColourPop Ultra Matte Lips.

I bought Donut, Mars, Succulent, Guess and Lychee. They’re $6 a pop so it’s hard to resist buying more than one!

I tried on Guess last night and while it is interesting I’m not completely sold on it. Same with Donut. I have the same problem with Donut that I have with Mi-Am-Ee from Australis’ VelourLips range. It’s a bit light and a bit watermelon-y for my taste and it made me feel a bit ridiculous. So I’m sorry to say that those are going to need a bit more work/bravery from me before there are pics. But Mars, Succulent and Lychee are all great! Here they are, in that order: 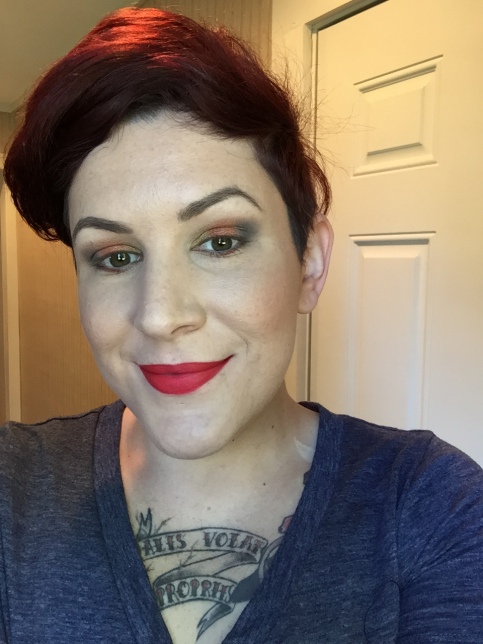 Fun right! Ok so as for the consistency, it’s good. It’s somehow more comfortable than a lot of other liquid lipsticks. It’s only been a couple of hours but other ones often “flake/pill” up on me by now so I’m impressed. One layer was enough to build adequate opacity, and they were easy to apply with the applicator. Guess was tougher but that’s just because the color is less forgiving – mistakes are easier to see with dark colors. They dry down matte but not chunky. Because you don’t have to use a lot of it, it doesn’t get an opportunity to feel too ‘thick’ on your lips. Good times!

All in all, for $6 each I kinda feel like you can’t go wrong. The packaging is sturdy and not cheap-feeling.

Here’s the swatches in the same order as above: 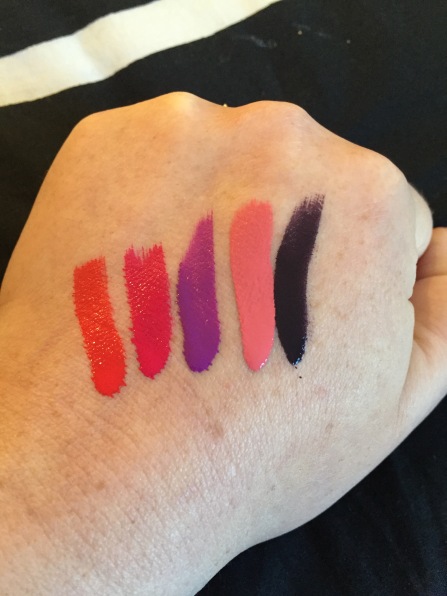 The lower end is a bit liquidy because that’s where I first touched with the wand, but the other end is already dry not more than a few seconds after application. Pretty impressive stuff.

So anyway that’s my review for today – pretty much loving all o’ dis. September Favorites is coming up this week.