I was editing my profile yesterday and I realized / remembered that the description for this blog includes the word “lifting”. I haven’t talked too much about that yet, and it may be something that doesn’t get talked about for awhile, even though I love to lift (and I love to talk about lifting!). Who among you has NOT had their ear talked off, or, unfortunately, lectured by past-me who felt the need to be a smug, superior jerk about lifting? I love to lift the weights, I really really do. 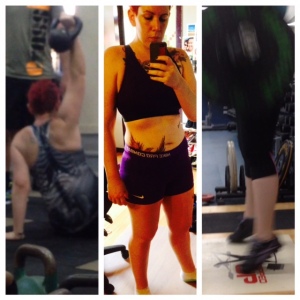 However, of late I’ve been taking a long stroll down that well-trodden path, Struggle Street. I really have. The last year, hell the last year and a bit, has been pretty crazy for me. Let’s examine, in point form, what has been happening:

Phew, right?! That’s a lot of things. Normally, the gym can be relied upon as something that makes me feel centered, something that grounds me and makes me happy. Lately it’s been an absolute chore, I dread every session. That ain’t right, at all.

At first I thought it was because I wasn’t eating enough, or enough of the “right things”. I found every way in the book to blame myself. I resigned myself to just “sucking it up” and going anyway because gaining fat and getting weak is totally unacceptable. I tried lots of things to get myself excited about the gym again. I bought a new program from an online coach I really have a lot of respect for, thinking that’d give me the jumpstart I needed to love the gym again. People here and there gently suggested that my life had been full of upheaval and maybe I just needed to take it easy but NO. That’s not me. I’m organized and motivated and I can do ALL OF THE THINGS!

Actually, no I can’t. I want to stand still for awhile. I’m tired to my bones and to whatever skeletal equivalent my soul has as well. I just want to nest with my husband, pull myself together and do the things that make me happy for awhile.

Crunch time came last week when, after the gym, I found myself in tears in Ponderosa (a Sizzler-style restaurant, don’t judge me, Ray loves that shit) while talking this out with my husband. Not my finest moment 😐 I had had trouble articulating what the problem was before. I found myself telling him that I knew I had to keep working out because that was the only way I could eat food and not feel bad. It was the moment those words left my mouth that I realized there was a problem bigger than I had previously thought. That’s seriously disordered thinking and I have worked hard to try to get rid of those kinds of thought patterns. Alarm bells, right?

Right. So it’s time to take a break for awhile. I don’t anticipate it being a long break. I like feeling strong and having muscles. But it’s time for a reminder that those things don’t define me, and that I’m allowed to eat food to live, not just to lift. I’m not looking forward to the starting again, but for right now I feel strongly that this is the right thing for me and my body and my little family here in the backwoods of Vermont in the Spring.

And I guess the point of this post (because who the fuck honestly writes a post about taking a break from the gym? Get a real problem Fran) is to say that there is no shame in taking a break from something, even if you really love it. Taking a break isn’t failing. It’s a pretty big win in the game of understanding yourself and listening to yourself, whether it be your body, mind or soul. It doesn’t mean you love that thing any less. It just means you’re taking time to regroup.

Thanks for reading, take care of yourselves. You’re super important! ❤

PS. Can we talk about my mug?! It’s no “I Am Very Busy and Important” mug but NEVERTHELESS..

Well, those of you who know me personally will know that the last section of my visa process did not go smoothly. I’m not going to go into detail here, suffice to say that it was absolutely no fault of our own and related purely to the lack of knowledge (regarding the department’s own processes) had by the person who interviewed me.

I still managed to leave on time, JUST, and the port of entry experience at LAX was actually delightful. Thank goodness. My official greencard has not yet arrived but my social security number has so that’s a really great thing, it opens a lot of doors in terms of things I can do and apply for etc.

Since I got here, I’ve been spending a lot of time with my husband and his parents obviously but we’ve also done some travelling in the local area, shopping, eating and all that fun stuff.

We went for a drive to Nashua, where I dropped into Old Navy and got some very ugly and comfortable fleecy trackpants for hanging around the house (I have barely taken them off to be honest). On the way there were all these awesome cliff mini glacier things which I thought were super cool looking, check them out: 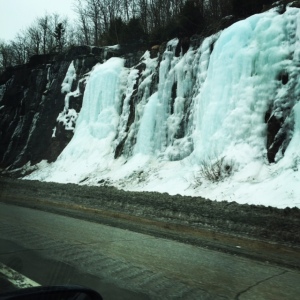 I also went to Sephora (I swear to god I can’t help myself but they had some things I wanted, and a very knowledgeable salesperson who talked to me about contour in a very sensible manner which I enjoyed) and picked up a few things, then to Lush which is why I was really there. I needed some Ro’s Argan Body Conditioner – I swear by this stuff as I have previously stated. It’s wonderful for those of us who are super slack with putting on body lotion when getting out of the shower. I mean, who really has time!? Not I.

After that we drove to Keene where I went to Ulta. Ohhhh my god, that place is HUGE and magical! It’s like a massive explosion of beauty, there’s high end and drugstore brands all in the one place. I loved it, and the staff there seems a little bit less snooty than the Sephora team. Sorry Sephora! But Ulta won out so far for me. A lovely lady helped match me with the new Urban Decay concealer (wait for my April faves for a full report on this one) and I definitely wouldn’t have picked the one she matched me with so that was a relief. Anyway, here’s a picture of my haul from that day:

A couple of the above will also be featured in April favourites. I was particularly excited to see the Real Techniques bold metals range of brushes, I was proud of myself for choosing just one. The hype is right: it’s great and the handle is so well balanced. As you can see, I also grabbed another couple of the Kat von D Everlasting Liquid Lipsticks and the IT Cosmetics Tightline mascara sample which is SURPRISINGLY awesome, you guys! I heard the team member who ended up helping me raving about it to another customer so I had to pick up the mini version to try it out. I’m a sucker for a teeny little brush and this one is so small you can hardly see the “bristles”. Full review in April favourites for that one too.

After that we went to a for-realsies American diner, called Lindy’s. It was great, I mean, look at this!

We got incredible mocha java concoctions, which we are still talking about, and I got a delicious breakfast including pancakes (it was 4pm). Ray got oyster chowder and macaroni and cheese.

The next day was WINGS NIGHT at the local pub (we also went there for trivia on Sunday night and games night on Monday!) so I decided to go with a very smokey eye because hell it’s still basically winter here! 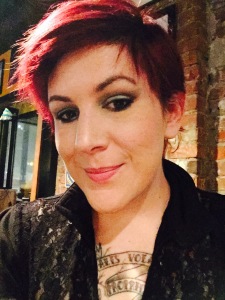 And speaking of winter it snowed out the WAZOO Wednesday afternoon / evening, well it was like 3 inches of snow which isn’t anything that amazing to New Englanders but I was totally fucking enchanted you guys! It was amazing and beautiful! On the way home Ray was pretty nervous about driving and we had to stop halfway so he could brush some snow off the back window. Wowsers it was serious business. I took some pictures the next day of the yard:

Unfortunately I still had to take this monster outside to wee: 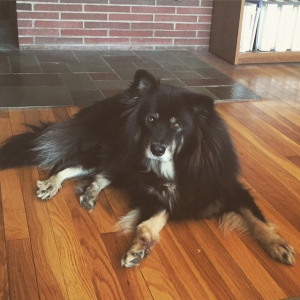 … but I only went as far as needed for her to make a lil patch of yellow in the snow.

Yesterday we went to Rutland, where we are actually going to live. It was a gorgeous drive along the Ottauqueechee River. We checked out a few apartments, some better than others, and we checked out an amazing gym. That was the find of the day. It has a Crossfit box but allows use of it by non-Crossfitters which is kinda rare so we were so thrilled. It’s a small but well equipped box, the best kind. The Crossfit box we went to earlier in the week was huge and well equipped as well but a lot more serious. One of Ray’s friends is a coach there and is actually going to Regionals so that’s super exciting! I PRed my front squat at 90.7kg (200lb wiew) there but the price for a short membership or even a casual visit was cost-prohibitive so we probably won’t go back.

Today at the co-op we grabbed some coffee and eggs and stuff so I can start eating a real adult breakfast (Ray insists on eating Lucky Charms ugh!) and I found some Vegemite – check out this price, I nearly DIED:

Pls don’t call it yeast extract ugh it’s so much more than that!

Tonight we are going to a supposedly-amazing burger bar and I think I’m going to try out the new Urban Decay palette I bought in LA. I will report back if it’s not a total disaster – I’m sure it won’t be. Burger pictures will also be forthcoming. Yay!